Today's shoppers have a myriad of choices when it comes to shopping for food in Indonesia. From the neighborhood gathering of vegetable sellers, to traditional markets, to mom and pop grocery stores to modern 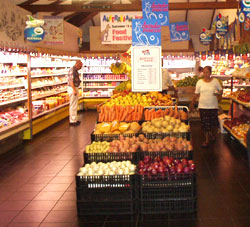 supermarkets, and the hypermarkets which have been opened with investment from foreign grocery store chains.

Today, shoppers in Indonesia, both expatriate and local, have a good choice of pleasant, hygienic surroundings in which to shop for food. The largest national supermarket chain in Indonesia is Hero. It has particular stores (Kemang, Terogong, Pondok Indah) that cater more to its expatriate customers than other Hero stores. These stores feature a wider variety of imported foodstuffs.

In Jakarta there is, in addition, Kem Chicks, Food Hall Supermarket, Ranch Market as well as some small chain or family-owned neighborhood supermarkets. Hypermarkets include Carrefour, Makro, Lotte Mart, and the Grand Lucky. Most neighborhoods have small convenience stores such as Indomaret, and Alfamart, that sell basic food stuffs and snacks. Many major malls in Jakarta have a Hero or other larger chain supermarket in the mall as well. As these chains grow they've opened stores throughout the archipelago in the larger cities.

With the number of expats from around the world, shop owners have started to cater to specific ethnic groups. For example, many ingredients that would be used to make Japanese dishes can be found at Daiso, Mall Artha Kelapa Gading, and Papaya in Blok M. Indians can find many spices and food needs  that they require in "Little India" or Supermarket Mustafa or India Papadam, most located in Sunter and Kelapa Gading . Korean expats can find Korean ingredients at Mu Gung Hwa in the Senopati area. Most of these establishments are run by people of the same ethnic background that understand what fellow patriots will be looking for and need.

Whatever style of shopping you enjoy - there is a choice for you!

A World of Choice

Today's modern Indonesian supermarket and hypermarket features a selection of local and limited imported goods, fruit, vegetables, fresh milk, dairy products, meat, household and cleaning items. The bigger chain stores feature cash registers with optic scanners for quick check out services. Full service stores have baggers, using plastic bags or reusable shopping bags. In an effort to reduce the use plastic bags, the government passed a regulation to charge for each plastic bag used, so bring your re-usable bags if you want to avoid paying that fee when you shop. You can ask the baggers to help you take your groceries to your car. Some shoppers choose to give them a small tip as a thank you.

Most expats are pleasantly surprised at the variety of produce that they find in supermarkets in Jakarta. You may not have the vast selection of certain items that you might find in the North American or European 'super stores' but a wide selection of good produce is available for consumers.

Perhaps unusual for foreign shoppers are the use of Deposit Counters in the supermarkets. Bringing bags from outside into the store premises is discouraged or not allowed. You 'deposit' these goods at a counter near the entrance, where it is safely held until you're ready to depart. You are given a tag with a number when you drop off the goods and you surrender this tag to reclaim your goods upon leaving. Laptops or electronic items of higher value are not allowed to be left at the deposit counters as the stores do not want to be responsible for them. 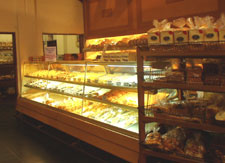 In some stores, small distributors open counters within the premises. When you purchase an item from them, you may be required to wait until they write up a bill listing the items and their prices, called a nota. Take the nota to the cash register and pay for these items along with your other goods. The items may be given to you, with the nota attached, or you may need to retrieve them from the deposit counter after payment has been made.

Many supermarkets offer additional services on their premises, including shoe repair, dry cleaning, pharmacy or small restaurants. This benefits the shopper in a hurry and helps makes one-step shopping possible.

Popular too are online shopping apps like HappyFresh, Club, Sayur Box, Club Sehat, Namaste Organic, Javara, and Luxofood Indonesia which allow you to order groceries and other goods that are then delivered via motorcycle to your home/office at a scheduled time by the personal shopper. There might be a small delivery fee which is normally determined by the size of your order, which is a bargain considering that it more than makes up for the time you would be caught in traffic going to shop.

The last few decades have seen enormous development in retail supermarkets throughout large cities in Indonesia. Prior to the development of modern supermarkets, in the cities food was sold through local traditional markets (pasar) or from carts that were peddled around neighborhoods. With industrialization, and the availability of packaged foodstuffs, Mom and Pop food outlets grew in the cities and towns.

In the 70s, consumers saw the beginning of supermarket development when Hero Supermarkets opened their first

In the 90s, wholesalers began operations: Makro (SHV Holdings of Holland). Carrefour and and Lotte Mart continue to open an ever-growing number of store locations in Jakarta.

During the economic boom of the early 90s, there was a huge upswing in the importation of foodstuffs and household goods. The expatriate community, and those Indonesians who had lived overseas, were pleased to find many food items that had not been available in Indonesia previously. Prior to this period, expatriates utilized their baggage allowances to the max on home leave or trips to Singapore in order to bring in food treats from home for special meals or occasions.

The availability of so many imported products changed drastically in early 1998 as the devaluation of the rupiah against foreign currency put the skids on importation of many items. Stock disappeared from grocery store shelves during the initial panic buying, not to be seen for a long time. Consumers soon discovered that many of the consumer goods produced in Indonesia were also dependent on imported ingredients, so their prices soared or production stopped.

In December 2008 there was a incident in which contaminated milk and snacks from China was consumed by Indonesians which resulted in many children falling ill, being hospitalized, and some deaths. Since this incident the Food and Health Commission of Indonesia has required that all food products must be approved by their agency. This is a very timely and costly process, so many importers opted to discontinue many items that they were previously importing.

Over the last 5 years we've seen the mushrooming of convenience stores in almost every neighborhood.  Alfamart and Indomart are now the common go to neighborhood stores for basic food and cleaning items.  7 Eleven stores did try and enter the market but found it very difficult to compete with AlfaMart and Indomaret. 7-Eleven was relying on snack food, cigarettes and beverage sales, which proved to be unsustainable, so they have now closed down all their Indonesian locations.

Alfamart and Indomarets stock small containers of basic needs including cleaning supplies, shampoos, baby needs as well as offering services such as debit card top ups and bill paying services. They are targeting the middle to low class customer that make frequent small purchases, due to limited income. This marketing strategy, combined with their small mark up margin, has made this type of convenience store more suited for the Indonesian masses.

In 2020, online shopping is drastically effecting how Indonesian consumers shop.  The convenience of not having to fight traffic, as well as often lower prices, is making brick and mortar shops rethink how to maintain market share. Millennial working moms no longer want to have to go to the supermarket and prefer the convenience of online shopping.  With more specific options being available online, like organic foods, farmer direct delivery, vegan options, or hard to find options available 24/7 through websites and apps there is no longer a need to leave your living room to shop and many city dwellers in Indonesia prefer the convenience of having their food delivered direct to their homes.