The intensity and agility required of Jakartans in using public transportation is simply mind-boggling. In my opinion it is more emotionally draining and physically exhausting than the fiercest of reality show challenges. Move over “Fear Factor” and “Amazing Race”. Here is my experience which could happen to anyone on any given day – a very typical day on the streets of Jakarta.

I left home an hour late. Who could blame me? Last night’s commute had me battling against heavy traffic for 2.5 hours. Needless to say, I was dead tired. And now I had just 30 minutes of commuting time, instead of the usual 1.5 hours.

And if planning ahead would have saved me some pain - guess what? The taxi I ordered the night before didn’t show up at the time I requested. Five minutes later the company rang: “We’re still looking for a taxi in your vicinity, would you like us to continue searching or cancel the order?” Great, what where you guys doing for the last 10 hours?! I decided to cancel, hoping to catch a motorcycle taxi instead.

These motorcycle taxis, also called ‘ojek’, can generally be spotted at any busy intersection, which in my case should have been 300 meters away. But today I needed to walk an extra five blocks. All the ojek were either ‘on duty’ or were seeking the days’ wages working different job.

When I had reached the big intersection, the ojek driver stood up and asked: Ke mana? (Where to?). “Ke Blok M (to Blok M).” I said. He told me: “Lima belas, ok (15, ok?).” I bargain: Sepuluh saja (make it 10?). He shakes his head and sits back down. It was obvious to him that I was in a rush and didn’t feel like walking another block. (The information advantage in this negotiation was his, so to speak). After five minutes of haggling over the fare I ended up agreeing to 15,000 rupiah: “Ok, lima belas.” He starts the engine and hands me a helmet, which I reluctantly accepted.

The helmet was filthy. And the thought that it had been worn by 300 other passengers that same week always bothers me. I kept wondering what bacterial specimen I now shared with them. 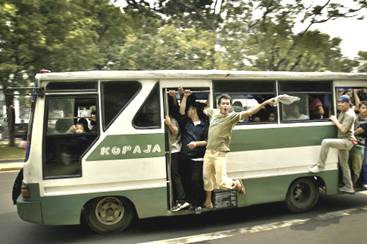 But at last I was on my way to my next stop, where the real commute was to begin: my main bus route. I saw my bus approaching and prepared for a unique athletic maneuver required to get on busses in Jakarta; all passengers except for old folks need to possess acrobatic ability, because for normal people the bus never comes to a complete stop.

I successfully climbed onto the packed bus which, I was certain, was going to tip over any minute. I held on for dear life with one foot on the bus and half of my body dangling out the rear door. Just as I had finally found the bus floor beneath my feet, I was greeted with an elbow in my face. Jakarta’s buses aren’t a place for the spoiled.

Halfway to my office I noticed a strong and awful stench. It must have been the old man I shared the 10 square inches of space on the bus with. I did my best to block out the smell. Thank goodness I hadn’t eaten breakfast; otherwise everyone on the bus would’ve known what I ate.

I scanned through the bus’ dark interior to identify which of the thirty six passengers could potentially be pickpockets. So I maneuvered myself into the most defensive position possible and once again felt my pockets to reassure myself about the whereabouts of my wallet and cell phone.

The conductor somehow managed to squeeze himself down the center aisle of the packed bus and signaled to collect the 2,000 rupiah fare. I pulled out my wallet as discreetly as possible and forked over the money.

By now I had been drenched in sweat and was hoping to find an empty seat somewhere, because my feet were beginning to hurt after 25 minutes of standing. While the bus was slaloming past other vehicles at 85mph, I tried to make my way to a seat that became empty. Struggling to maintain my balance another elbow hit me in the back of my head and an elderly woman, who also lost her balance, stepped on both of my toes before I had finally reached the first row. Just as I wanted to sit down I realized my stop was a block away, so I decided to relinquish the seat to the elderly woman.

I signal to get off at my stop and finally I made it out of the bus. ‘I survived another commute’, I said to myself, but then I get this funny feeling that something had gone terribly wrong. I checked my pockets and to my horror realized my cell phone was missing. I looked at the bus as it drove away.

Just another day on the street in Jakarta? Somehow I managed to gather some positive thoughts to dismiss the idea that this was probably the worst morning I’ve had so far this year. But moments later I felt better. Just then I spotted a blind man on the sidewalk and I couldn’t have felt more relieved. I couldn’t imagine going through the same ordeal without the ability to see.

Our thanks to Jason for sharing this mind-boggling commute experiences with the community !