It's not often that we, as foreigners in Indonesia, are given the opportunity to delve deeply into the cultural traditions of traditional Indonesian ceremonies. Recently, Hartmuth “Heinz” Kathmann and his lovely bride, Rose Merry Ginting, gave me that opportunity. Merry's father, Rakatta Ginting, served as our cultural guide as we discussed and looked at hundreds of pictures which document the traditional ceremonies in their recent marriage.

While each of the major Batak societies/tribes (Alas-Kluet, Angkola, Dairi, Karo, Mandailing, Pakpak, Simalungun, Sipirok, and Toba) are related, they have distinctive languages, customs and cultures. The traditional Batak homelands surround Toba Lake in North Sumatra. Merry Ginting is from the Ginting marga (clan) of the Karo Batak ethnic group, and her family ensured that the necessary wedding customs were followed, even though she was marrying a German national.

You Must Become a Batak, Heinz!

The primary obstacle to Heinz and Merry's marriage was the Batak tradition that a Batak can only marry another Batak, so Heinz had to be accepted into a Batak marga. Since tradition further stipulates that a man may not marry a woman from his own clan, Batak grooms have to search among the other 451 marga for a wife. Fortunately, 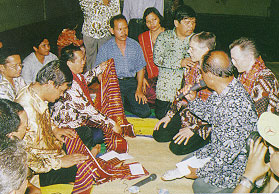 non-Batak grooms can be adopted by a willing Batak clan and thereby marry a Batak wife according to tradition.

In Heinz's case, the adoptive family was the Brahmana clan of Merry's father's younger sister. Heinz's adoptive parents held a special ceremony to discuss and get their permission for this adoption from their related clan members. All clan members must agree, as the newly admitted son becomes their relative as well.

As the Batak are patrilineal, the discussions were held between the male elders of the Brahmana family groupings which would be affected by Heinz's joining the marga. The family grouping representatives involved in this ceremony were the:

Heinz sat with these family grouping representatives, and gave the symbolic gifts of a uis nipis (traditional ulos

textile), a parang (dagger) and money, in this case a symbolic amount of Rp 12,000. The men accepted the uis nipis, and put the textile over their shoulders.

Discussions followed where Heinz and the family representatives discussed his joining the clan. At the successful conclusion of the discussions, the Brahmana family gave Heinz a uis nipis as a symbol of his acceptance into the clan. The textile was placed over his shoulders, and Heinz was then considered a son of his new parents and a full member of the Brahmana clan, with full rights and obligations, except the right of inheritance. As he was now a Batak, he could proceed with marrying Merry.

Heinz and his new clan members took part in two traditional ceremonies (pesta adat) to seek permission to wed Merry, the ngembah belo selambar (which means to bring a sirih leaf) and the nganting manuk (which means to bring a chicken). Heinz's new family went with him to the Ginting household to conduct these traditional ceremonies. As the prospective groom, the cost of the ceremonies was Heinz's responsibility.

The kampil is a closed basket, which is woven from pandanus leaves. It contains the ingredients for smoking and

betel chew . tobacco, matches or a lighter, sirih and other betel chew ingredients and small food items. The gifts are consumed as friendly conversation is enjoyed. When finished, the basket is returned empty and the ceremony can begin.

Discussions ensue between the two families . to determine if everyone is in agreement with the marriage, what the dowry will be, where the wedding will be held, how many people will be invited, what the wedding will cost, and who will pay for it. Men and women are separated during these discussions, with the men making all the decisions.

Following the successful conclusion of marriage negotiations in the ngembah belo selambar, either on the same day or soon thereafter, the nganting manuk ceremony is held for the symbolic payment of the dowry. Traditionally, the prospective groom's family brings a chicken to the bride's house, as the name of the ceremony implies. Nowadays, the chicken is usually accompanied by a traditional meal. 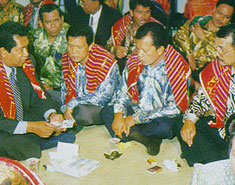 The dowry is symbolic of the replacement cost of the loss of the female to the clan. The amount is determined by the bride's family and is the same for all the clan's women who get married. In the Ginting clan the amount is Rp 286,000. The actual dowry will be paid at the wedding reception to members of the bride's family.

As most Karo Batak are Christian, a wedding ceremony in the church follows the two traditional ceremonies so the church can bless the union. The newlyweds usually dress up in western wedding finery, with an elaborate white dress and suit/tuxedo. The church ceremony must also be followed by a visit to the Civil Registry office to ensure the government legally registers the marriage.

Anyone who has ever been to a Karo Batak wedding reception can see that the Karo sure know how to enjoy a wedding party, which they refer to as the Kerja si
mbelin (pesta besar), or big party. The Karo bring new meaning to the adage, “Eat, drink and be merry” as a good time is had by all attending family and friends.

The wedding party enters the reception hall in a long processional with the bride and groom leading the way, 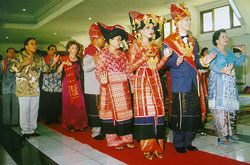 followed by the bride's parents, the groom's parents and then the close family members, grandparents, aunts, uncles and cousins. The groom's anak beru throw rice in front of the couple, to symbolize fertility. 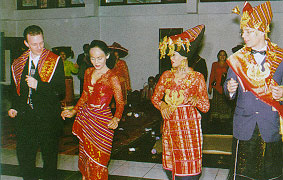 The anak beru of the bride's family cross the room to offer traditional kampil gifts to the groom's family as a sign of respect, though they don't necessarily have to partake of the contents during the reception.

The groom's family formally states that since they've paid the dowry they would like to assume possession of the bride. Both families stand and escort the bride and groom to meet in the center of the room, all doing the traditional 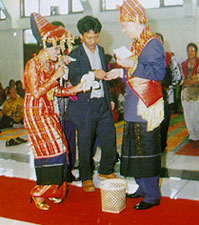 landek dance. Since the dowry has been paid and accepted, according to Batak tradition the couple is now considered married.

The families return to their respective sides of the room and the bride and groom are left dancing in the center of the room, with all eyes on the newlyweds. They dance the landek and sing to entertain their guests. As they sing and dance, family and friends come forward and put money in a basket at their feet as wedding gifts. The money is a modern custom and is not required by traditional customs (adat).

When the newlyweds finish entertaining their guests, they are accompanied by their families who dance the landek down the hall to the stage (pelaminan) where the bride and groom sit in a highly decorated setting with both sets of parents. In this instance, since Heinz was adopted into the Brahmana marga, his adoptive parents were onstage, as well as his actual brother and sister who flew in from Germany for the festive occasion.

After the family members are seated, the speeches begin. The first speeches are given by representatives of the groom's family, followed by the bride's family representatives. Both begin with speeches from their sembuyak, then the kalimbubu, and finally the anak beru. The newlyweds descend from the stage and stand before the various family groups as they give them advice on marriage, and how to maintain good relations with their in-laws and other family members.

At Heinz and Merry's reception the truly international flavor of the event led to speeches in Bahasa Indonesia, German, English, and of course the Batak Karo dialect.

Traditionally, close family members give textiles to the couple. These include uis nipis, batik and other textiles,

which are closely wrapped around the couple's shoulders, bringing them close together, symbolizing the togetherness of marriage. A batik selendang is often wrapped around the couple as a symbol of hoped for fertility as the selendang will one day hold the children that will come from the union. These ritual gift exchanges between the bride-giving and bride-receiving sides of the families are believed to increase fertility in the marriage.

Another traditional gift is the luah berebere. These practical household items are given by the bride's maternal uncle's family (kalimbubu). They symbolize the setting up of the newlywed's household. Traditionally, luah

berebere includes: mattress, pillows, sheets, dishes, glasses, silverware, an oil lamp, rice and bowls. In addition to the practical items, food is given which must include one chicken egg and two live yellowish-color hens, which symbolize fertility for the new couple.

When the wedding reception is concluded tradition demands that the bride and groom must return to the groom's family home and reside for four days and nights, without ever leaving the home for any reason. This practice dates

back to ancient pre-Christian customs where the groom's family prevented the possible kidnapping of a reluctant bride by a thwarted lover.

The elaborate ceremonies in a traditional Karo Batak wedding are filled with symbolic rituals and customs. These customs ensure the acceptance of the new union by their new families, establish the intricate relationships that will govern their lives and provide the opportunity for family members to extend advice and good wishes and give gifts to the happy couple. A Karo Batak wedding is a richly meaningful life-cycle event, enjoyed and celebrated by all the members of the families involved.

As in all traditional Indonesian wedding ceremonies, the wearing of elaborate traditional clothing is required. Heavy ornamentation with accessories and layers of various fabrics utilize colors and designs which are highly symbolic to the Karo Batak.

The bride's heavy headdress is called tudung gul. The groom's hat is called bulang-bulang. The bride and groom

The traditional Batak ulos textiles used in the wedding dress are all called uis nipis. However, they have different, special names when used in wedding dress, dependent on where they are worn on the body.

The uis nipis worn over Heinz's shoulders was the one given him during the ceremony to enter the Brahmana marga and is called langge-langge. The bride is wearing a sarong songket Palembang, and over that a red uis nipis which is called ndawa when worn wrapped around the hips in the wedding costume. The black textile that is worn by both bride and groom is called julu.

Note: Please note that Karo Batak wedding traditions vary, depending on the region that the person is from!