Like most expatriates far from home, parents in Indonesia make an extra effort during

special holidays to recreate traditions from home for their children. Halloween is no exception and is widely celebrated amongst the expatriate community in Indonesia, particularly amongst North Americans.

If you have troubles explaining Halloween to Indonesians, it may be helpful to think of Halloween in terms of something that is similar in Indonesia. A Halloween-like (in some ways) religious/cultural event in Indonesia is Nyepi, which is celebrated by Hindus in Bali. The night before Nyepi, the Hindu New Year, Balinese leave their homes and make a lot of noise all through the neighborhood and community, to scare away the evil spirits. The next day, Nyepi, Balinese must stay inside their homes, not doing any work, cooking or making any noise that would invite the spirits into their home. So, if an Indonesian friend asks you to explain Halloween, you may find it easier to point out the similarities with Nyepi than to describe how the pagan origins of Halloween turned into the candy-seeking, costume-wearing party that it is nowadays.

If you're looking for bright orange pumpkins, they will be hard to find in Indonesia. A local 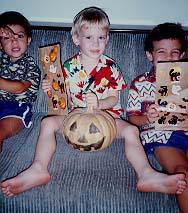 equivalent, labu parang, has a similar shape - though the color is tan. The meat and seeds are similar - so the carving experience is comparable.

You can purchase labu parang at larger pasar and neighborhood markets. Neighborhood vegetable salesmen rarely stock labu parang on their carts, but you may be able to place a special order a few days in advance. Other squash can also be found that are the same shape as a jack-o'-lantern, but the exterior would be green or green-orange. Even though these aren't the traditional jack-o'-lantern colors, your children will have just as much fun carving them.

Most parents will find it easy to create Halloween costumes in Indonesia. Seamstresses (tukang jahit) and tailors are used to making clothing based on a picture given to them. Halloween costumes wouldn't be any different - other than explaining what this strange outfit is going to be worn for! Clip a picture from a magazine, craft book, pattern book or website and take it to your seamstress, along with the material. Presto, in a few days or weeks, your kids will be outfitted and ready to party! Chances are, the seamstresses listed in AWA's Jakarta Shopper's Guide will be very familiar with Halloween costumes.

Ready-to-wear costumes are sold in the weeks prior to Halloween at selected stores and supermarkets. Normally sizes and selection is limited so it is advised if you see something that your child might like, buy it immediately.

Informal neighborhood expat groups usually organize trick or treat activities in Jakarta. The most popular locations, where they occur most years, are in Permata Hijau, Pondok Indah, Executive Paradise, and Kemang Club 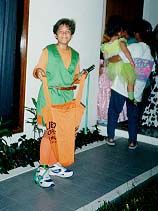 Villas, as well as in other housing estates where there is a high concentration of expatriate residents. You will need to find a friend in that neighborhood who knows about the trick or treat festivities so that you can find out which day/what time it will be held. It is not always celebrated on October 31st. Also, if you are not from that neighborhood, it's customary to contribute your share of candy to a friend's house on the route. The candy goes quickly!

In the bigger sub-divisions, since not all houses participate, most trick-or-treaters travel from house to house by car. There may be a map which is distributed detailing the houses on the route, or you can drive around at random through the sub-division searching for orange and black balloons or jack-o'-lanterns at the front gates of participating houses. This is one day in the year where you will actually find people's front gates open! 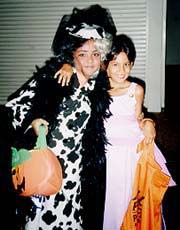 As you can imagine, the parade of children dressed in heretofore-unseen costumes quickly draws a small crowd of the Indonesian neighbors. drivers and servants who watch and enjoy the parade of fun. It may be easier to find the small crowd watching the trick-or-treaters than the balloons or other decorations which signify the houses that are participating.

Fortunately for the kids, some participating parents really get into the spirit of the holiday and decorate their homes with lots of Halloween cheer, even creating mini-haunted houses for the kids to tour.

One of our favorite trick-or-treat experiences was the event put on by expats in Permata Hijau a few years ago where the kids traveled from house to house by delman (horse-drawn carriage). Halloween Trick or Treating - with Indonesian wheels!

In areas where trick or treating is held year after year, you may find Japanese and/or Indonesian teens also joining in the fun. Unfortunately, they don't necessarily wear costumes, so you might want to think about how you might handle these kids - before they come.

In recent years there have been isolated incidents of crime on Halloween. In the stories we've heard, Indonesian teens pretended to be trick or treaters, only to force their way into someone's house to steal electronic goods. Be 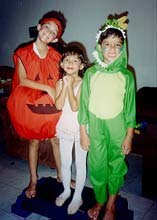 sure that your jaga/driver, and other household help is out in front of the house to help you keep watch. A show of bodies is a fine deterrent. Another alternative is to have your household staff distribute candy from the gate, or man a partially open gate so that only expat children in costume are allowed to go up to the front door.

Despite the isolated incidences of crime associated in recent years with Halloween - you will undoubtedly find that the controlled, small nature of the celebration is safer than in the west. Thank goodness - no one here has heard of poisoning candy! The small amounts of candy the kids collect will be far less than in the average sub-division back home - so there will be smaller belly aches the next day too!

If you are a member of a recreation or community association like AERA or ISCI, check with the Activities Director to see if they have any festivities planned for the kids. If you're not a member, perhaps you can participate as a guest of a member. Student or 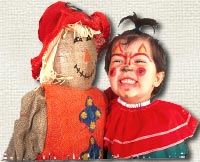 Each year some of the international hotels, restaurants and night clubs such as Smoking Joe's BBQ, Grand Kemang, Hard Rock Café, Planet Hollywood, will put on special promotional events for Halloween. The staff may be wearing costumes or they may be featuring a special menu or activities during the days before and after Halloween. Call your favorite restaurants and see if they have anything planned. Some clubs and lounges have parties for adults to celebrate the night  and dress up in costumes as well. Not everyone will participate by wearing costumes though  and normally there will be more spectators than participates! Often it is worth the effort of making or wearing a costume though as some of the best dressed prizes are quite attractive! Normally clubs will have the party on the Saturday night that is closest to October 31st (either before or after).

Another great way to celebrate Halloween is to throw a party in your own home. Celebrating with expat friends 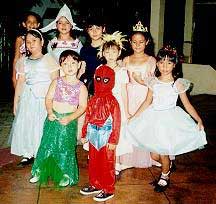 makes sense, as the Indonesian community at large doesn't celebrate. Children, teens and adults alike can all don their costumes and join in the fun. If you need party ideas - they're only a quick surf away on the Internet.

You may, however, encounter difficulties when inviting Indonesians to a Halloween party. There is a widespread teaching amongst the Indonesian Christian community that Halloween celebrations are related to devil worship. Given the pagan origins of the holiday, that is perhaps understandable. Given Indonesians usual reluctance to say they won't attend an event they've been invited to - you may have a big surprise if you invite a bunch of Indonesian kids and no one shows for the party.

So as mid-October rolls around, hunt down your labu parang, visit your seamstress and check out the many opportunities to join in the Halloween fun.