What to Expect on August 17th, Indonesia's Independence Day

The holiday celebrates Indonesia's independence from Dutch colonial rule. The day is referred to by Indonesians as Tujuhbelas Agustus (17th of August) or Hari Merdeka (Independence Day).

17 Augustus - Leading up to the big event 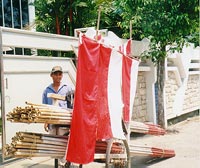 Preparations for the patriotic celebrations begin 2-3 weeks before the 17th of August. High-rise office buildings around town sprout large banners or lighted designs, fences around the presidential palace and many government offices are draped in red and white bunting, malls are decorated in red and white and hold Independence Day sales, the city administration spends large amounts to create a unique series of red and white lighted decorations of main thoroughfares, housing complexes repaint their main gate decorated with independence themes. The whole town takes on a red and white hue and the words Dirgahayu RI (Long live Indonesia!) can be seen everywhere.

Political observers, social scientists and those with opinions write 'Insights' in the newspapers and magazines on the country's progress since independence and challenges for the future as well as discussions on what the founding fathers would think of various conditions in society today.

Neighborhood associations often coordinate special activities for the neighborhood children and may request donations from homeowners to sponsor races, games and prizes for the children. One of the most popular is climbing a very tall greased pole to reach the prize at the top. Schools hold contests to see which class can decorate their classroom in the most patriotic manner as well as holding games and races amongst classes.

TV shows commemorating the struggle for independence are aired before and after Independence Day. All-star musical extravaganzas are held in various venues and broadcast throughout the archipelago. 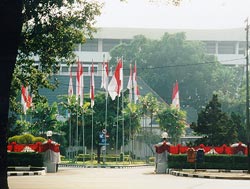 Neighborhood associations, or your local RT (neighborhood head), may organize a clean-up of the area or kerja bakti. Drains are swept, weeds are cut back, debris is burned and public areas are repainted. Women are asked to provide snacks to the hard working men. Homeowners are expected to fly the Indonesian flag for a set period of time before and after the holiday. Businesses may be asked to make contributions to fund an extravaganza of fireworks and entertainment in Monas Square as well as for other more localized festivities. In years past, neighborhood heads would ask homeowners to paint their homes, at least the front, in preparation for the big day.

The President delivers the State of the Nation Address to the members of the House of Representatives, diplomatic corps and honored guests on the day before Independence Day.

The most solemn ceremony is the flag hoisting at the National Palace, televised live. Full of pomp and circumstance and conducted basically the same way each year, it is a spectacle of the greatest respect and honor for the flag and the Republic. The ceremonies are led by the President and Vice President, and attended by the cabinet, military brass, family members of the current and preceding president, diplomatic corps and honored guests. High School students from throughout the archipelago are chosen for their marching skills and put on a show of intricate steps and turns to hoist the flag. The military is out with all its brass in high shine, standing smartly at attention in their dress uniforms.

While the solemn ceremonies are taking place, neighborhoods gear up for fun and games for the kids. Krupuk (shrimp chips) eating contests, bike decorating, games, races and lots of fun fill the day. The women are busy in cooking contests to see who can make the biggest krupuk or the most delicious nasi tumpeng.

One of the most popular games is the Panjat Pinang. An Areca palm trunk is erected in a public area and well greased with a mixture of clay and oil. At the top are hung various prizes like bikes and TVs. Whoever makes it to the top wins the prize. Needless to say there are a lot of slippery, muddy kids and grownups alike climbing over each other and struggling to reach the goal. A good time is had by all, especially the crowd watching the gaiety.

In the past, the government held a spectacular Independence Day parade on the Sunday after Independence Day; a spectacular parade of floats and marching bands which began near the National Monument and traveled down Jl. Thamrin and Jl. Sudirman. The floats were sponsored by government institutions, state companies, private firms and foundations. The artistic skills which won Indonesia acclaim in a Tournament of Roses parade in the past were enjoyed by the tens of thousands of Jakartans who showed up to enjoy the spectacle.

As a foreigner, your participation in the festivities would be welcomed by most Indonesians. You could sponsor a picnic for your employees and their families, put on a children's activities day at the factory, or help fund the neighborhood activities near your office or plant. Just contact the local RT to find out what they have planned and how you can help. As an individual you are always welcome to join in the neighborhood activities around your house. Join in the fun ... and spend time getting to know your neighbors!