Taxi firms are licensed by the Indonesian government. On major roads in Jakarta you will probably be able to flag down a taxi. The few exceptions are during periods of heavy rain or rush hour when the demand is exceptionally high.

Where to Find Taxis

Taxis can be found in pangkalan (taxi queues) at malls and hotels, or flagged down off the street with a wave of your hand. It is also customary to send your household staff or Satpam to a nearby main road and they'll bring a taxi back to the house for you. Alternatively, you can phone the taxi company or use their app to order immediately or put in an order for the next day. A taxi will be sent to your home or the location that you request. There is often a minimum charge for taxis ordered by phone.

Depending on where you live and the time of day, ordering by phone or App may not be as quick as flagging one down off the street. But if you are willing to wait, you can be assured of getting a taxi from a reputable company. If you can determine which taxi company has its “pool” closest to your point of departure. You'll probably get a taxi much quicker from them.

At the wave of your hand the taxi driver may flash his lights, slam on the brakes or stop dead in the middle of the road to pick you up. Others give you calm, curb-side service. Many times, preferential treatment is actually given to expats who have a reputation for tipping well; if there are several Indonesians nearby trying to flag down a taxi, the driver often chooses to pick up the expatriate instead. Not fair, but nice when you're rushing home to your family after a hard day's work or trying to get out of the rain/heat!

What are the Good Taxi Companies? 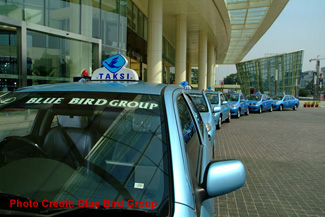 Prior to the pandemic there was a number of taxi options, however due to lack of demand and the prolonged length of downtime over the pandemic many companies declared bankruptcy or have a severely depleted number of vehicles in their fleet.

Silverbird, and Bluebird are the names given to distinguish the difference level of vehicles that will pick you up. The Silverbird fleet are black. Normally they are a Mercedes or an Alphard van.

Alphard vans are great if you are traveling with a group of people or a larger family. The public can take advantage of the space and luxury, at a higher rate than other taxis, of course. Silver Bird taxis are most easily located at malls, five-star hotels or you can call or order for home pick up as well. Silver Bird can also be rented for out-of-town trips to Anyer, Carita, Pelabuhan Ratu, Bandung, and beyond.

Bluebird taxis are blue in color. Normally they are a sedan or a transmmover. They also can be ordered via application or by phone.

Try out the GrabTaxi app to order a taxi easily from a variety of companies.

What Problems Could You Anticipate / Safety Concerns? 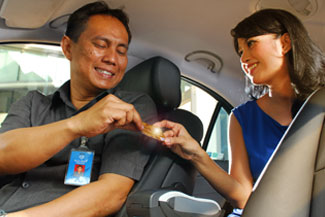 The foremost fear of newcomers is not being able to explain in Bahasa Indonesia where they want to go to the driver. Solutions are: use the Silver Bird taxis whose drivers speak some English, write down the address on a piece of paper and have your household staff be sure the driver knows your destination before you leave the house or use the taxi's radio operator to translate to your driver as the radio operators usually speak fair English. Obviously, the short and long term solution to this problem is to learn Bahasa Indonesia!

Some taxi drivers do not like to go into congested areas or streets notorious for traffic jams, so be sure the driver knows your destination before you get into the taxi and make sure that he agrees to take you there. If you are in a taxi queue, often the attendant will ask you where you are going and before you get in they will confirm with the driver that he agrees to take you to your destination. 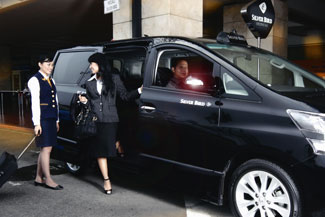 Upon entering the taxi, lock all the doors; this is a very obvious sign to the driver that you are concerned about your safety. DON'T allow the taxi driver to stop and pick up other passengers or even talk to his 'friends' along the side of the street. In some taxi robberies the driver stopped the car to talk to friends that he “just happens to see on the side of the street”, and then the friends jump in the taxi and rob the passengers, together with the driver.

Accidents are certainly possible. Despite the crazy ways people drive, there are relatively few serious accidents in Jakarta. If the taxi you are in is involved in an accident, and the drivers involved get into a serious argument, it is best to get out, pay what is owed and leave the accident scene. Streets in the countryside, or major toll roads between cities see lots of accidents, often caused by bus or truck drivers being sleepy, road conditions, and higher speeds.

If you notice that your driver's argo (meter) has gone WILD, or you see from Google Maps you're following through your smart phone that is driver is seriously detouring from the suggested route, just get out and get another taxi. Question his road choice as he might be avoiding traffic problems. But if you're familiar with the roads/costs, don't be afraid to challenge the driver about the inflated reading.

Occasionally taxi drivers ask you to pay a set amount for the trip, borongan, instead of using the meter. You don't have to do this. If they insist, just get out and find another taxi. By doing this, the driver is able to cheat his employer out of a share of his day's income, because it doesn't show up on the meter reading.

A true danger is a driver who has no sense of safety on the street and sets your heart to racing with his speed, sharp turns, tailgating and reckless passing of other cars. Don't hesitate to tell the driver that you want him to slow down “Pelan-pelan saja Pak”, or to be more careful “Hati-hati Pak.”

As an extra safety precaution, when you are in the taxi call your husband or a friend on your hand phone and tell him/her in a loud enough voice for the driver to hear that you are on the way and give the taxi number. If the number is busy and no one answers, just talk anyway!

At 'flag fall' the meter begins at Rp 6,500 and climbs Rp 3,500 each 1/10 of a kilometer; the 'waiting' rate is Rp 42,000/hour (January 2018)*. It increases at a slower rate for passing time, especially noticeable when you're stuck in a traffic jam. Taxi drivers have a daily setoran (rent) that they need to reach each day.

Don't expect taxi drivers to be able to give change for large bills; carry enough small denomination rupiah notes (Rp 5,000, 10,000) to pay the fare. While tipping is not mandatory it’s a good idea to round the fare up to the nearest Rp 5,000 or Rp 10,000, which often solves the change problem as well.

Most taxis are equipped with electronic payment systems and can accept credit/debit cards. If the car has been ordered via app, you can choose to pay through app or on completion of the jouney. GoPay, OVO or Iris payment is now becoming the simplest way to pay with no cash involved. Often there will be promotions or Cashback offers allowing you to save a substantial amount on your journey. Silver Bird and Bluebird taxis accept vouchers, which can be subscribed to on the Bluebird Group website. 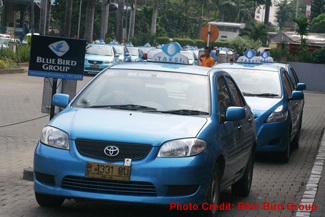 Taking a taxi in Jakarta is a true cultural experience. The drivers have their hands on the pulse of Jakarta and can be the source of lots of helpful information. Ask your driver how he feels about events in the news, and you'll get some very interesting responses. These conversations offer the expatriate unique insight into how the Indonesian masses feel about social issues of the day.

Being caught in a traffic jam is a great time to try out your fledgling Bahasa Indonesia on your driver. You've got a captive audience!

Taxi drivers also know the greatest short cuts. Give your driver free reign occasionally and you'll learn invaluable new routes past traffic-prone areas. If you find a great taxi driver, you can often make an arrangement for him to pick you up on a regular basis, langganan, or ask for him by name when you call in for a taxi.

Better yet, if you have a car, hire that driver away from the taxi company -- and put him to work for your family :)

Being Taken for a Ride

Occasionally cabbies will try to talk to you and test you to see how much bahasa Indonesia you know. You'll hear them say something like ... “Sudah bisa bahasa Indonesia, Mister? Mister sudah lama di Indonesia, yoch?” He's actually testing you to see how long you've been here, and if you haven't been here very long, he could drive you around in circles before getting to your destination. Remember - the further the ride - the higher the meter goes! It seems like he's being friendly and making conversation, but watch out. Make sure you know the most direct way to your destination and then you tell the driver which way to go. If you are not that familiar with the streets, open a route application like Waze or Google Maps to suggest routes for you. Be aware however that there may be a longer, yet faster way, or a short cut so if you are suspicious in the driver's route choice, ask him where and why he is going that way.

Solutions: get to know Jakarta quickly and try to anticipate your routes before you leave home/the office so you can see if the driver is turning off it consistently. Try to familiarize yourself as quickly as possible with Jakarta’s main streets and major landmarks, so that you will have an idea of whether or not the driver is taking a circuitous route. Consider downloading a GPS or map app to your smart phone so you can monitor where you are going.

At the very least learn to say your address in Bahasa Indonesia - including any major thoroughfares and local landmarks near your home to help give the driver a good idea of the location if it's a bit out of the way - and then just sit - you'll be amazed at the difference it makes.


Learn the basics for giving directions in Bahasa Indonesia in AWA's Words and Phrases.

Photo Credits: Bluebird Group. Photos may not be used without permission from Bluebird.