Congklak, A Traditional Game of Indonesia

One of the most fascinating things about living in Indonesia is the discovery of bits of Indonesian culture which are actually not Indonesian at all, but originate in other lands. For

centuries, the Indonesian archipelago has been visited by traders from many corners of the world who came to buy spices and other agricultural riches. Indonesian cultural diversity benefited by the many peoples who passed through the archipelago, due to Indonesia's location along the primary trade route between Europe and Asia.

Together with the items they brought to sell, these traders brought bits of their culture along with them as well. These included religion, language, foods and textile traditions. Less written about than spices, silks and ceramics, however, are the games brought to Indonesia by travelers over the centuries.

I've long been fascinated with Congklak, which I had thought of as a traditional Indonesian game since I first played it in Yogyakarta in the late 70s. Much to my surprise, my previously held belief in the Indonesian origins of this game was shattered when I saw a Congklak board in a cultural display organized by the African Women's Group in Jakarta some years ago. Upon seeing the game I said, “Oh, you play Congklak too ...” The women staffing the exhibit said “No, this is Wari, a traditional African game.” Thus, my first inkling of the widespread nature of this game.

Congklak has its origins in either Africa or the Arab world, depending on which scholar's theory you choose to believe. Some of the oldest evidence was found in National

Geographic-sponsored archaeological diggings dating back to 7,000 to 5,000 BC in present-day Jordan. Excavations of a house uncovered a limestone slab with two parallel rows of circular depressions. The layout was easily recognizable to an archaeologist on the dig as the Congklak playing board. Murray, a noted scholar, traced the origins to ancient Egypt's Empire Age (about the 15th to 11th centuries BC). Many experts surmise that Congklak may in fact be the oldest board game ever.

The earliest recorded writings describing the game were found in references to mancala in Arab religious texts dating to the Middle Ages. Some scholars believe that the game originated in the Middle East and spread from there to Africa. Then, the game spread to Asia with Arab traders and came to the Caribbean around 1640 via the African slave trade. Other experts place the origins in Central Africa. 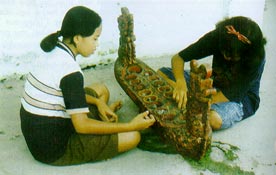 Today, the game is known by numerous names around the world. The names are taken from the local culture using words that reflect where the game is played, the manner of winning, the mode of play and the board or counters used. It is referred to in English as Count and Capture.

In Arab countries, the most common name is mancala (an Arabic word meaning in English “to move”). In some West African countries the depressions in the board are referred to as Warri or Awari, which means houses, thus giving it the name Wari. In Nigeria the game is known as Adi, which is also the name of the seeds used to play the game.

Due to its widespread popularity, enthusiasts have developed numerous web sites documenting various versions of the game. For a good link list to many of these sites, see http://www.staff.science.uu.nl/~bodla101/d.gam/mancala.html. Another good web site, http://www.myriad-online.com/en/resources/awalink.htm, lists 279 names of the game found through their research. As you surf through these web sites, it's fascinating to see how each country or culture has its own customs relating to the making of the board, who can play, as well as how and when the game is played. Some sites feature online versions of the game as well, if you'd like to play with other enthusiasts around the world. On the topic of online congklak, it has been suggested that congklak inspired games may begin to appear in online casinos, which already offer traditional games such as sic bo and Baccarat.

The game is so popular that the British Museum's Museum of Mankind featured an exhibition of mancala, Wari and other Congklak playing boards in 1997.

Even within Indonesia, Congklak is known by different names from region to region. The most common name, Congklak, is taken from the cowrie shell, which is commonly used to 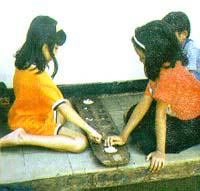 Historical references to Congklak refer to the game played by young girls of Javanese nobility. It is most likely that foreign traders, due to their close contact with the upper classes, introduced Congklak to them. With the passage of time, Congkla' s popularity grew until its now widely played by the common people as well. In most regions, Congklak play is limited to young girls, teens and women in their leisure time and its seen as a 'girl's game'. In only a few regions is Congklak played by men and boys as well.

In Sulawesi, historically, the game was reserved for play only during grieving periods, after the death of a loved one. It was considered taboo to play the game at any other time. In Central Java, in pre-historic times, Congklak was used by farmers to calculate the seasons, to know when to plant and harvest, as well as to predict the future.

The playing board is made from wood, with variations from island to island in the number of

holes on each side, either 5, 6, 7 or 9 holes. All the boards have two 'store house' holes, one on each end. The design varies from simple, unadorned woods, to boat-shaped boards, to highly decorated playing boards. In Central Java, elaborate designs utilizing the Javanese naga (dragon) are common. Dragons face out from both ends, with their tails decorating the side of the boards and legs suspending the board up off the floor. Congklak boards can be elaborately carved and painted, with gold and red being popular colors. Most, however, are made of relatively plain wood.

As in the archaeological find in Jordan, diggings in Mojokerto, Lamongan and Bondowoso in East Java have unearthed Congklak 'boards' with holes carved into large stones. These were found along with the broken pieces of temple stones and other archaeological remains of earlier times.

In Lampung, village children often play without a board, but instead create their own playing area by scooping out holes in the ground and collecting stones or seeds each time they want to play.

Not much has changed since prehistoric times, when Congklak was played with stones or seeds. In Indonesia, stones, seeds and shells are used to play the game, whatever is close 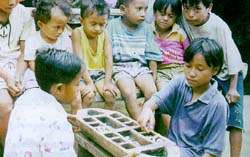 at hand. Near a beach shells may be used. Near rivers, the game may be played with smooth pebbles and in agricultural areas, seeds. Commonly used seeds are tamarind, kemiri, sawo and even corn kernels.

The widespread popularity of Congklak around the world can undoubtedly be attributed in part to the simplicity of the materials used to play the game. Congklak, in all its variations, continues to attract dedicated players as well as craftsmen, mathematicians, programmers and collectors of regional art and handicrafts.

Whatever version you play today, and by whatever name you call it, you'll find Congklak a challenging game of patience and skill.

For detailed Instructions on How Congklak is Played in Indonesia